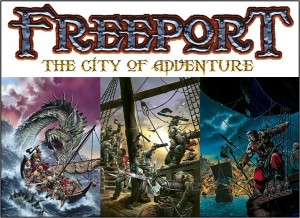 If you’ve been following my recent elucidations on Facebook, Twitter, my own website, or the new Prismatic Tsunami VLOG, then you have probably heard me extol the virtues of Green Ronin’s Freeport setting.  Freeport is a pirate city with some Lovecraftian undertones and plenty of room for adventure, political intrigue, investigative play, and lots of piraty goodness.

It first appeared in the adventure module Death in Freeport, released the same day as the 3rd Edition D&D Players Handbook in August of 2000.  The adventure was soon expanded into a trilogy and the company started producing free downloadable content to help expand their city and provide a plethora of tools for the discerning DM  to wield responsibly and with great wisdom.

Eventually they released the first actual setting book, and I was quick to snatch it up and launch a campaign.  It was a smaller group that I ran alongside our regular bunch on an alternate game night.  And since it was an investigative game set in a pirate town, all three of my players decided to explore character concepts that had nothing whatever to do with investigation.  Or pirates.  I was a little surprised, to say the least.  But I soon grew to love these characters as much as any who had ever graced my gaming table, and we enjoyed two or three years of on-again, off-again hilarity and profundity in Green Ronin’s ever-expanding City of Adventure.  There really is no way that I could convey the ridiculousness of this particular degree of success, so permit me show you precisely what I was dealing with…

The first character was Argamon the Red.  Argamon was a dwarven multi-classed fighter/sorcerer with a club-footed Dexterity of 5 and a serious propensity for coming up with the wrong answer for any situation.  Having developed sorcerous talents in a superstitious dwarven community, Argamon was effectively ostracized and elected to set out on his own.  Despite his relative inexperience as an adventurer, he routinely entertained his comrades and erstwhile drinking companions with largely fabricated and heavily exaggerated tales of heroic deeds designed to spread his fame and unnerve any would-be antagonists.  Additionally, though he spent considerable effort honing his mystical talents, he had an unusual habit of utilizing them in unexpected ways.  Ever he strove to prove his dwarfishness, and he even took up work in a local smithy to hone his natural skills with working metal.

One of the ruddy-bearded, crimson-garbed dwarf’s hardened compatriots was a monkish fellow named Taermon.  A generally serious and fairly dour individual, Taermon’s player exhibited – through the course of the campaign – an unending series of pretty much the worst die rolls I have ever, EVER seen.  This quickly became a characteristic of the character, and Taermon was widely considered a well of bad luck best avoided at all costs.  He took employment as a bodyguard on more than one occasion, though his potential clientele soon diminished as he failed to keep one employer after another from meeting their doom.  A notable failure was the gentle gnomish bard with a troop of adopted teenage human girls with whom he frequently shared the stage.  The gnome had an unfortunate gambling problem that soon turned quite fatal, and Taermon’s sense of responsibility quickly turned the four teenage NPCs into wards who constantly needed saving from themselves… though the eldest of them quickly became a love interest.

The final member of the trio was a young gnomish woman known as Twinkle the Barbarian.  A diminutive canine-mounted rogue who had learned to tap her inner rage to lend her strength in times of need, Twinkle earned her keep with the development of a specialized courier service that delivered clandestine meeting arrangements, discreet payoffs, and questionable merchandise throughout the city’s underworld for a modest fee.  Though the quietest of the group, Twinkle had a self-satisfied manner and a lust for fun and games that made many of her associates finish their drinks quickly and depart lest they get caught up in another grand scheme.  And of course, you just didn’t want to piss her off.

A more unlikely group of investigators might have been hard to find.  They often stumbled into one situation or another and frequently fell for the red herrings.  But they had a blast doing it, and there was quite simply never a dull moment for any of us in Freeport: City of Adventure. 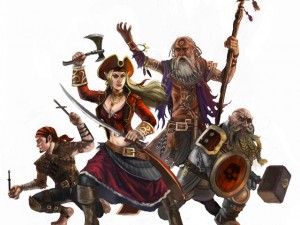 I recently interviewed Chris Pramas of Green Ronin on our podcast, and we talked about the latest development in this wondrous city’s noble heritage:  a 512-page full-color hardback for use with the Pathfinder game system.  I’m not even a Pathfinder guy, yet I can’t wait to get my hands on this tome.  If you’d like to check it out (and trust me, it’s more than worth it), I encourage you to support the Freeport Kickstarter campaign currently in progress.

And get yerself some booty!  Arr…!