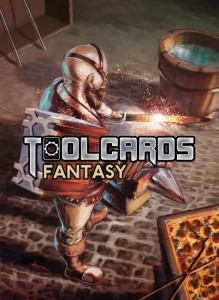 Over the past few months, I’ve been running a kind of nontraditional fantasy adventure using Savage Worlds on Google+.  It’s been an education in many ways.  As a lifelong D&D enthusiast, it was my first shot at a Savage Worlds fantasy game.   Instead of a party of intrepid graverobbers, the group consists of the officers and advisers at the head of a royal army, and the threats the party has faced have been largely supernatural.  Mind you, these are all consequences of decisions made by my players as we worked toward launching the campaign, and it’s been a blast.  There are, in fact, still scorch marks in my head from last night.

In the story thus far, the action has been slipping and sliding toward a crescendo that involves a hitherto unknown supernatural beastie whose minions have been terrorizing the villages of the eastern wilds of their home kingdom.  Over the course of several sessions, I introduced a few of its more notable lackeys, had NPCs provide (sometimes inconsistent) background on the region, provided the PCs the requisite opportunity to screw everything up by slaying the witch who was protecting the townsfolk from the worst of it, and finally set them on the path to the Big Bad.

Jim Pinto’s Post World Games provided me with just the vile critter.  I recently helped fund Jim’s newest Kickstarter for a product called Toolcards, a collection of thematic card decks loaded with thoughtstarter elements that can be randomly selected and combined to extraordinary effect.  This is the fantasy version of the product, and the principal deck can be employed during game preparation – or even during play – to meet a broad assortment of needs.  I’ve always loved thoughtstarter products, like adventure seeds or interesting NPC ideas… most often, ideas that are born of an idle source of inspiration take on a life of their own.  I have taken many a beating from the wayward concept incited by contemplating a character in some oddball indie film that went on to fuel the collective imagination of my players such that it refused to eat its vegetables and the players cheered it on.

Did that metaphor run too far astray? 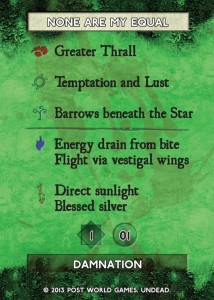 Well, each Toolcard presents of a list of elements that can represent simple Lego pieces in the creation of your choice.  Any given card provides a name, a location, a monster idea, some sort of magic, even a couple of descriptive concepts.  Need a monster?  Draw two or three cards at random and let your eye wander across the surface picking out words that work well together.  You could end up with a Nightshade Pegasus guarding the amberdrought elixir in a forest the beast has set ablaze.  Or a petulant ash-belching Blooded Warbeast, one of the handful of creatures who escaped the Wizard-King Vale when Rhoden the Geomancer was slain.  Or maybe you just use the Grayskin Halfling  called Elias the Forester, who wants to know why you’re here?  All that from THREE CARDS, by the way.

So I needed a Big Bad.  I knew it was a supernatual creature of some sort, so I reached for one of Jim’s specialty decks marked “Undead” and shuffled out a few cards.  This is what I ended up with:

The Corpse-King Butcher is believed to be a spirit who haunted the wilds of Eastern Anterrus for centuries.  His origins are a matter of pure speculation, as any dealings with the creature have inevitably led to the researcher’s long and arduous demise.

In the 13th year of the reign of King Madroc the Wise, the Butcher was seen in the shadow of the Great Wood (now called the Birchwood).  Guardian Loielle DeCanith related the following account:

Witnesses spoke of the haunting of the Mayfair village for years.  His heralds were shades, harmless but to those who spoke to them directly, easy to avoid if they kept to their homes in the darkness of night.  For passing a threshold into the homes of the living wouldst sap the shades of all their strength.  Even the infamous Night Walker was but a shadow of a shadow in the warmth of a family hearth.

A local witch did conjure a ward sufficient to hold the beasts at bay should they even deign to near a woman’s stoop.  ‘Tis a most curious bouquet.

Mayfair is believed to be the name of a small hamlet to the north and west of the Great Wood.  Nothing remains of the village save the remnant of a church and a small cemetery.  A survivor’s account suggests that the Butcher arrives after a group of villagers had entered the wood and assaulted the heralds.

In the 26th year of King Lorgrim the Just, a contingent of king’s men were sent to the town of Durham in the shadow of the Longwood.  The village had fallen prey to a creature of mist and murder, another herald of the Butcher.  An apprentice Guardian named Calmed wrote:

The massacre in Durham was unworldly.  The king’s men entered the wood to confront the monster, but never returned.  Two nights later, the hanged man was seen on the hilltop overlooking the township, and the Butcher appeared in the streets.  A young herbwoman knew the beast for what he was and bade the villagers flee to the temple and the shelter of their gods.  Many scoffed at the woman’s superstitions and soon fell beneath the Corpe-King’s blade.  Their homes were no sanctuary, and a madness spread through the town that turned one man upon another or upon his family in an attempt to escape.  Only the women seemed secure from the insanity, though they were no less vulnerable to his wicked blades.  Once upon holy ground, however, the Butcher came under attack from the townsfolk, and he was bitten by the knives, and he did run.  The gods truly protected the survivors of Durham that night.

One other account described a holy man who fell upon his knees before the Butcher and bade forgiveness for his sins and was spared, the Butcher’s power unable to bring him harm. 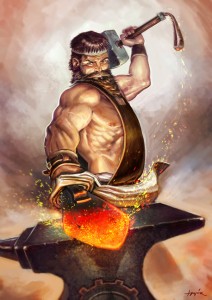 This was basically the information available to one of the PCs – a “guardian,” as mentioned in the text above, who specializes in monster-hunting – when, as the party returned to a village after victorious battle with the Night Walker, he spotted a spectral hangman’s tree in the distance and finally put all the pieces together.  You will eventually be able to hear all about it, and the battle that followed in the streets of the town, in our dramatically-produced Actual Play series The Obsidian Crown.

Thus far, the Toolcards have proven an invaluable resource, and there’s enough material in the cards to easily provide a virtually endless supply of potential material.  In addition to the standard deck, you can pick up a few of the specialty decks to help kickstart or fill out ideas for characters, cults, dooms, potions, quests, traps, undead, and more!  I cannot recommend them enough.  Go.  Buy.  Let your inspiration particles be fruitful and multiply.