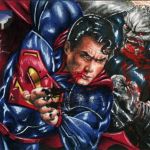 “As this is the first DC Comics trading card set in years, we wanted to include something for trading card collectors and DC Comics fans alike. Exclusive base card art, sketch cards from some of the best artists in the business and a lenticular chase set—there’s something for everyone in every pack,” said Cryptozoic’s trading card brand manager, Miranda Anderson. “We’ve had a great time working with DC Comics on this card set, and we are really excited to launch today and get the cards to fans.”

# # #
Note to editors
@CryptozoicAbout Cryptozoic Entertainment
Founded in 2010, Cryptozoic Entertainment, Inc. is a premier developer and publisher of original and licensed board games, card games, comics and trading cards, including the World of Warcraft® Trading Card Game, The Lookouts comic book, The Big Bang Theory: The Party Game and The Walking Dead™ Board Game. Following a philosophy and core principle of “Fans First,” the dedicated gamers and fans of the Cryptozoic Entertainment team are focused on producing fun and amazing products along with epic events that bring all gaming fans together as part of the Cryptozoic community. Visit www.cryptozoic.com for additional product and event information.

BATMAN, SUPERMAN, WONDER WOMAN, GREEN LANTERN and all related characters and elements are trademarks of and © DC Comics. (s12)