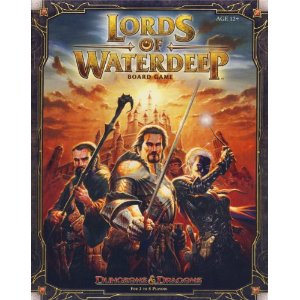 Under no circumstances do I enter into a relationship with a new game lightly, particularly when it costs around $50 to do so.  As an old school tabletop RPG player, I certainly already own more than enough gaming material to keep me entertained for the next 200 years or so.  So why buy into Wizards of the Coast’s audaciously-entitled Lords of Waterdeep?  Well… two reasons.  One, because it has such a fancy-looking box.  Trust me, I know what I’m talking about… I have more than a few old Helloween CDs, and I didn’t buy them for the contents.

Secondly, because it’s amazingly original.  So many games are just clones of something else with a little flavor and a couple new mechanics bolted on.

Thirdly (did I mention that there were three?), because it has lots of cool little fiddly bits to keep me entertained.

Okay.  So maybe I should’ve stopped at two.  The game play is rather unique, making a round of Lords of Waterdeep rather unlike anything else I’ve ever played.  It is a strategy game, of sorts, but not a war for nations.  As you huddle around the aesthetically pleasing game board, you adopt the persona of a scheming, backstabbing, money-loving, no-good… er, person of interest, who just happens to be one of the 15 or so powermongers who persistently vie for control of the city’s vibrant economy.  In a deceptively organized fashion, you bribe officials and make back alley deals, plying gullible adventurers with promises of fortune and glory as you slowly undermine the efforts of your worthy opponents.  And then, when no one is looking… you pull your dagger from the hidden sheath in your peryton-skin boots and plunge it into the heart of your neighbor.

Then you sleep on the couch for about a week. 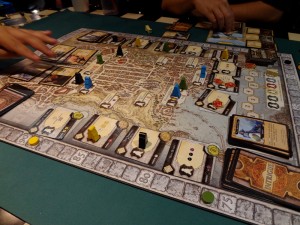 But seriously… Lords of Waterdeep employs the quick-paced action of a Eurogame and the time-honored traditions of strategic play to craft an unusual game that, despite the intimidating inclusion of about five thousand little pieces, is quick and easy to learn and not particularly difficult to master.  The rules are deceptively simple for a game with so many elements, and the game uses decks of intrigue and quest cards to add a random facet to every individual’s treasure chest of options.  And best of all, your identity as one of the city’s 15 lords is kept a secret during play, and each lord has his or her own agenda that provides buckets of potential victory points at the end of the game.

I’ve now played through almost a dozen games, and every game is very different.  Play time, once you’ve got the flow of the game figured out, rounds out at about two hours, give or take the time any given strategist decided to chew his curd while studying the board.  I’ve played several games with a full compliment of five players (they claim there will be an expansion that allows a sixth), but it is just as fun with only a few.

Your agents in the game are represented by standing pieces with a roughly bipedal shape, and the adventurers you hire to complete your quests are represented by friendly little cubes, color-coded for each of four basic classes.  Finally, the coin is modeled after the square brass toals that are used in Waterdeep according to later-edition D&D canon, and cool little golden sickles to stand in as 5-piece coins. 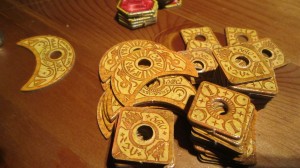 The game changes constantly, allowing for everyone to enjoy the journey without a clear idea of how it’s going to turn out.  Lords of Waterdeep is an excellent game for anyone old enough to grasp the mechanics and refrain from eating the pieces.

That being said… the little victory-point trackers look delicious.  *grins*

Orryn Emrys, the Prismatic Dragon, is the director of the Prismatic Tsuanmi web community and the host of the popular Metagamers Anonymous RPG podcast.  Learn more at http://www.prismatictsunami.com.

One Response to “Review: Lords of Waterdeep”