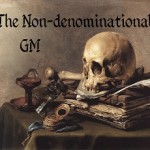 Hello and welcome to my blog!

I’d like to take this opportunity to introduce myself.  My name is Dan, and I am The Nondenominational GM.  I’ve played with a lot of colorful characters in my time, both in and out of the game.  My current gaming group consists of my family:

Elaina (13), is a casual gamer who prefers light-hearted games but enjoys the occasional table top RPG.

Aaron (15), is a hardcore gamer, he enjoys more intense and involved games and would sacrifice breathing if he thought it would increase his damage per second.

Jacob (18), is a free spirited gamer who is always ready to play anything, but doesn’t wander too far into the pandemonium that is gamer geek fan-dom.

Brandon (21) was the first of our children to be pulled into the hobby, having grown up, he isn’t as active in our family gaming as he used to be.  He has his own circle of gamers now and is creating his own gaming stories.

Kate (?) my beautiful fiancee, is a casual gamer that enjoys the time spent with her family, however, she lacks the patience to play the longer games.  Although, there was a time when she role played a fox who was an inspirational speaker with a black belt in karate in a QAGS game that my ,then, 12 year old daughter ran.  She was fantastic!

I love them all, and words can’t express my appreciation of their enabling of my gaming addiction!

As for me, I’ve been gaming for nearly 25 years,  everything from Chutes and Ladders to D&D.  It all started when I was 8 years old.  I was at my sister’s house for the summer, and the kids next door were on their front porch playing some kind of game with pencils and paper and some little Christmas ornaments that had numbers on them.

I watched them for what seemed like hours, trying to absorb the rules of the game by proximity alone.   I went home and began tearing open every game box we had in the house looking for some of those weird shaped dice.  A huge mess and a little while later, I resurfaced with all of the 6 sided dice in the house (Yahtzee was like finding a pirate’s treasure!)  I then began to write my own game on a piece of notebook paper.  It was going to be the greatest game ever…Mad Max-Beyond Thunderdome RPG!!!  Of course, I didn’t call it that, I wanted everyone to think I was a genius.   My first  player was my sister.  Although I’m sure that she would have rather drank a glass of barbed wire than to suffer at the hands of her little brother’s first GMing experience, she was a good sport.  I had a blast, and a GM was born.