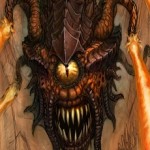 Finally, it’s all in place. You’ve done the bookwork. The characters are all rolled. And after much introspection and contemplation you’ve sewn the first strands of a web-like plot in your head. Now, every great adventure needs a grand beginning.  So how do you bring this all together? You want to get your hooks in early and keep them on the line, but how? Too many campaigns commence in a tavern.  A group of adventurers just deciding randomly to throw their lots together just doesn’t offer that explosive start you’re seeking. Wait a minute, that’s it! Start with a bang, literally.

Nothing will get your players attention quite like a fight. In fact, I think a good skirmish can be exactly what is needed to really kick things off right. It sets an exciting tone for the rest of the campaign. Immediately, and without remorse, the characters are put to the test and are instantaneously inundated with a sense of fear and anticipation of what awaits them beyond each turn. That sense of anxiety and curiosity works fantastically to a DM’s advantage in a number of ways. Similarly, the scuffle itself can be used to several ends.Inflatable bouncers

Characters and players experience will vary. Some players may be seasoned vets, or as with my party, most are quite inexperienced and green. A good scrap right from the start is great because it provides an immediate opportunity to explain the rules and mechanics of the game itself. It’s a lot easier to teach someone how THACO (old school D and D battle mechanic) and Armor class work when it’s in game and they’re rolling dice as opposed to in a conversation. The fight can be a clever way to give your players a tutorial without them realizing because it can simultaneously kick off a grander story arc. It doesn’t have to be a semi- random onslaught of kobolds upon a quiet farming community. However, there is no shame ever in a random kobold offensive.

Many good lads were lost to the Great Kobold Incursion of 987 DR.

For my group I had arranged a delightful little ambush by thugs. Though it should be said, this was not just a lame attempt at extortion. The opening sequence of the campaign came together as something of a theatrical production.  I had given each player a few specific lines or actions there were to take to get things started and then they take over with their role-playing and off we go.

So it was, the paladin of the group is a young nobleman named Dhagan who had recently been promoted to captain of the guard of Copperkeep, the city in which this is all set.  He and his trusted counselor, the wizard Vaerzaal, were at the barracks awaiting the arrival of a bounty hunter, a ranger of some renown by the name of Ulderic the Blackbear. The ranger was bringing to justice a young and naïve halfling rogue known as Longbelly who was involved in the robbery of a powerful and influential mining guild. As the gruff ranger pushed the bound Longbelly into the captain’s chamber he declared with a wry smirk on his weathered face, “It’s not so hard to track a Halfling.”  So there they were, the four would-be companions. The first interaction wasn’t particularly amicable as you might imagine.

The halfling revealed that he was the “patsy” in a grander scheme. He offered up anything he had on the local thieves’ guild, and was even willing to help in the capture and disposal of the rest of the bandits in exchange for his own neck. (A truly typical amount of loyalty shown by a thief) However, no sooner than he had struck his bargain, they were all ambushed by a group of thugs hired to assassinate the halfling should he be bold enough to show his face or portly belly. To the little round one’s credit, he did immediately endear himself to the group by saving Sir Dhagan’s life in the onset of the ambush. The halfling, gifted with great dexterity and freshly unbound, unsheathed his sword in a flash and deftly batted away an arrow bound straight for the knight’s head.

Fear not though, after some tense moments the group did successfully overcome the thugs. It is important to remember not to overwhelm your party right away. You want to challenge them, but you don’t want to set a climate of defeat within the group. Certainly not in the beginning anyway, sometimes you will need to crush them just to remind them they’re not the biggest kids on the block. But, a nice clean victory over some brutish assassins to get things started, that sounds about right.

They’re getting a little cocky, it’s time for them to learn what a beholder is.

And that was our first session. They came together, they fought together, and they learned together. After all, anyone who plays or played old school knows THACO takes some getting used to. All in all, it went really well.  It’s all about finding the right blend, my friends. You have to have a good mix of story-telling and the hack and slash. Once your players get the hang of what dice they need to roll when, and the web really starts to unwind, it becomes like your new favorite show and you can’t wait for the next episode.