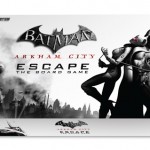 Irvine, CA — Warner Bros. Consumer Products, DC Entertainment, and Cryptozoic Entertainment™, the premier developer of original and licensed games including The Walking Dead Board Game, today announced an all-new board game, Batman™: Arkham City Escape. Based on the amazing storyline of the award-winning videogame series developed by Rocksteady Studios and published by Warner Bros. Interactive Entertainment, this two-player game will pit Batman against all of his greatest foes, from The Joker and Harley Quinn to Poison Ivy and The Riddler, as they try to escape Arkham City. In stores in early 2013, Batman: Arkham City Escape will feature one player as Batman and another controlling twenty of the Dark Knight’s most vile enemies in a battle of strategy and combat, as Batman attempts to stop the villains from escaping captivity.

Cryptozoic’s Batman: Arkham City Escape board game will feature an Arkham City game board, over which one player moves villains while Batman tries to prevent their escape. When Batman and a villain occupy the same space on the board, epic battles ensue, as Batman utilizes his Utility Belt and Combat cards and risks retaliation from each villain.

“The fact that Batman is a great property with a huge amount of material to work with is both awesome and daunting for this game. We really wanted to offer fans a way to experience combat between Batman and his enemies, and this game is all that and more,” said Cory Jones, president and chief creative officer for Cryptozoic. “With Arkham City Escape, Batman alone fights all these villains to keep the streets of Gotham City safe.”

In Batman: Arkham City Escape, players will rely on strategy and cunning to win, and each game will offer new twists and turns depending on each player’s decisions. The game will be complete right out of the box, offering an 18” by 33” Arkham City game board, an 11” by 18” Utility Belt board, eight custom dice with both Bat-symbols and The Joker smiles, a 40-card villain deck, a 40-card combat deck for Batman, and much more.

Batman: Arkham City Escape will be available in early 2013 at the suggested retail price of $45.00. Please visitwww.cryptozoic.com for more information, and keep up to date with exclusive contests, promotions and game information on Cryptozoic Entertainment’s Facebook and Twitter pages.

– All-new game demands strategy and cunning from both players

BATMAN and all related characters and elements are trademarks of and © DC Comics.
(s12)